Google Analytics Home: The Good, The Bad, and The Ugly 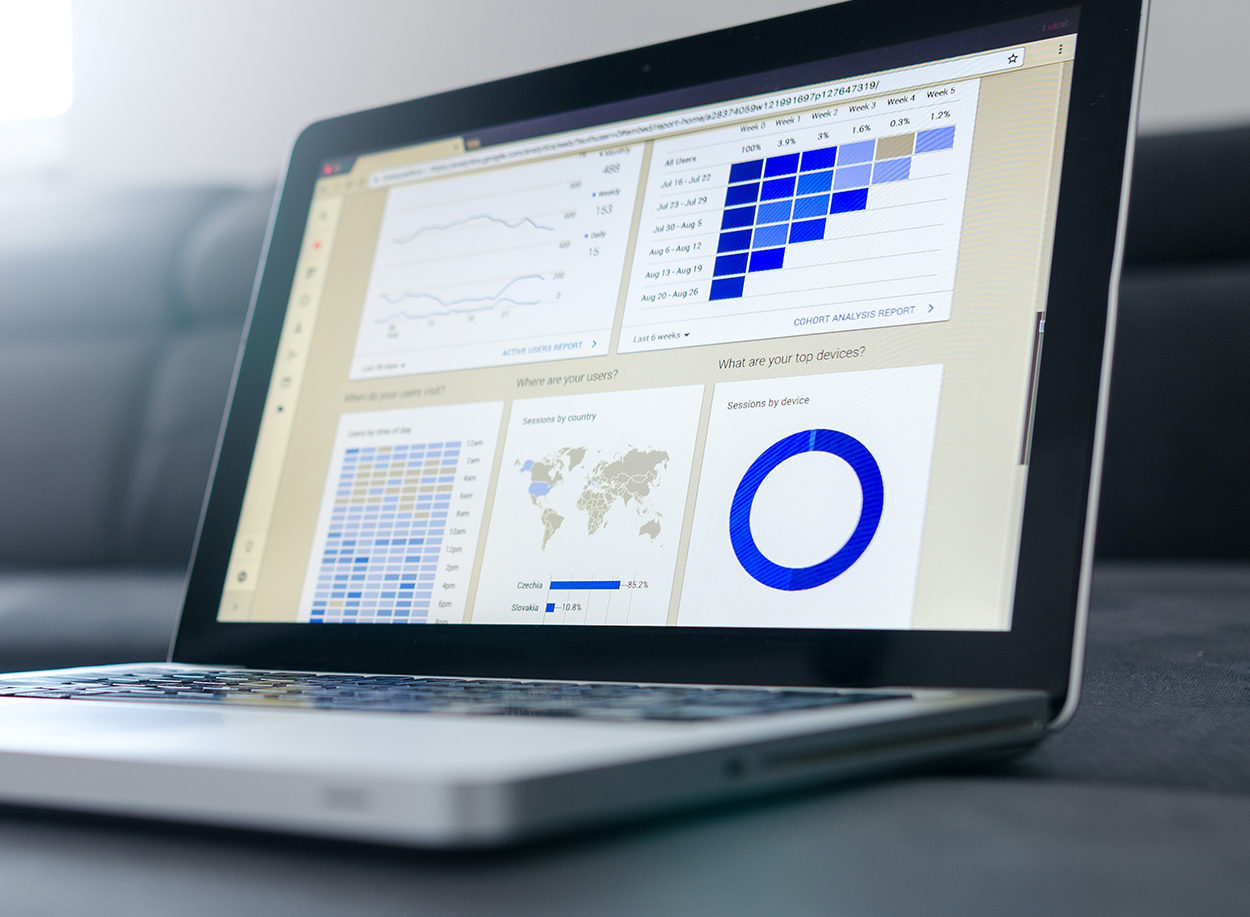 Google announced in a blog post last month that they were implementing a new landing page for Analytics accounts, called Home, that would be released globally at a later date. That date, it turns out, was this week, and we can now see what the newest addition to Analytics can do. 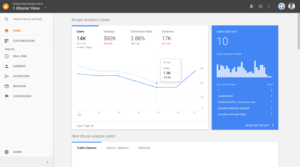 Those of you who read my last blog on the new AdWords interface will likely recognise some similarities to its overview tab, with visualisations such as graphs and heatmaps summarising the reports that already existed within Analytics. Much like the AdWords update there is no new data here, it is instead an attempt to make that data as easy and intuitive to interpret as possible. So the real question is, do they succeed?

The Good – Simple, Intuitive Data At A Glance

The attempt to make the new Analytics Home intuitive begins before you even look at any graphs. Each visualisation is given context using a question above it, such as “How do you acquire users?” or “When do your users visit?”. This is a small addition to the interface, but it means that once you begin looking at the associated graph or table you already know what the data is going to be telling you. This saves you time you would otherwise use working this out. Similarly, below any visualisations summarising a report there is a deep link to the report itself, so if you see a dramatic drop in users you can instantly drill down into the user report to try and understand why.

You then reach the visualisations themselves. The Home will adapt to the features you have implemented on your account. So if you have Ecommerce set up, for example, a new snippet will appear summarising your transactions. The form the visualisations take is varied, from line charts to heatmaps, and some provide intuitive insight into the data, such as the source/medium graph. 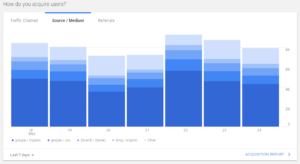 The same graph can display channels and referral sources

The graph not only provides you with a quick ranking of your acquisition channels, which can be read at a glance, but also tracks the user trends in the last seven days. It is easy to read, and yet can give you some key insights to drive your marketing strategy. I would like to see day names displayed alongside the dates to avoid any confusion over weekly trends such as the weekend slump, but apart from that this is data visualisation done right.

The Bad – Too Much Information

However, not all the visualisations are as easy to read as the source/medium graph. In particular, I found the retention rate snippet particularly confusing. Its strange axes confused me initially, with weeks seemingly on both axes, along with percentage values and user dimensions. Even once I had worked that out, the heatmap made it seem like percentage of users had increased in week three for one of the data sets, which, it turned out, was not the case. 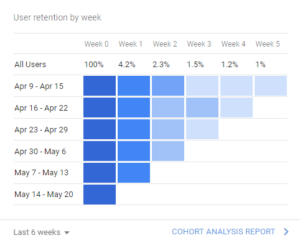 What is Week 2? Why are All Users dates? All questions I asked myself when I saw this.

The Ugly – Fifty Shades of Blue

An issue I have with all the visualisations is the colour scheme. I understand the need to stay on brand, but the differing shades of blue are too similar, and makes it far too easy to confuse dimensions on graphs. For example, the reason for the confusion on the heatmap previously was an optical illusion, caused by the shades of blue. Google’s logo on its own contains three more colours, so why can’t we see some of those here?

Some snippets also seem to forgo the visualisation of data entirely. For example, the pageview snippet simply consists of a list of pages, with their view tallies. This feels out of place among the pie charts and segmented bars of the other snippets. Compare this to the keyword, or new search term snippet in the AdWords interface, which provide a visual approach to a list of data such as this. I would have much preferred one of these implementations, especially since it provides much more meaningful information at a glance.

In spite of some snippets falling short, and the colour scheme having a frustrating lack of variety, the new Analytics Home is a welcome addition to the system. It is perfect for those who have 5 minutes to look over an account, and want the top line stats presented to them in a way which communicates the trends in the data. It is also a good lesson in data visualisation, and its most important rule: Simplicity is key, no matter how complex the source material may be.