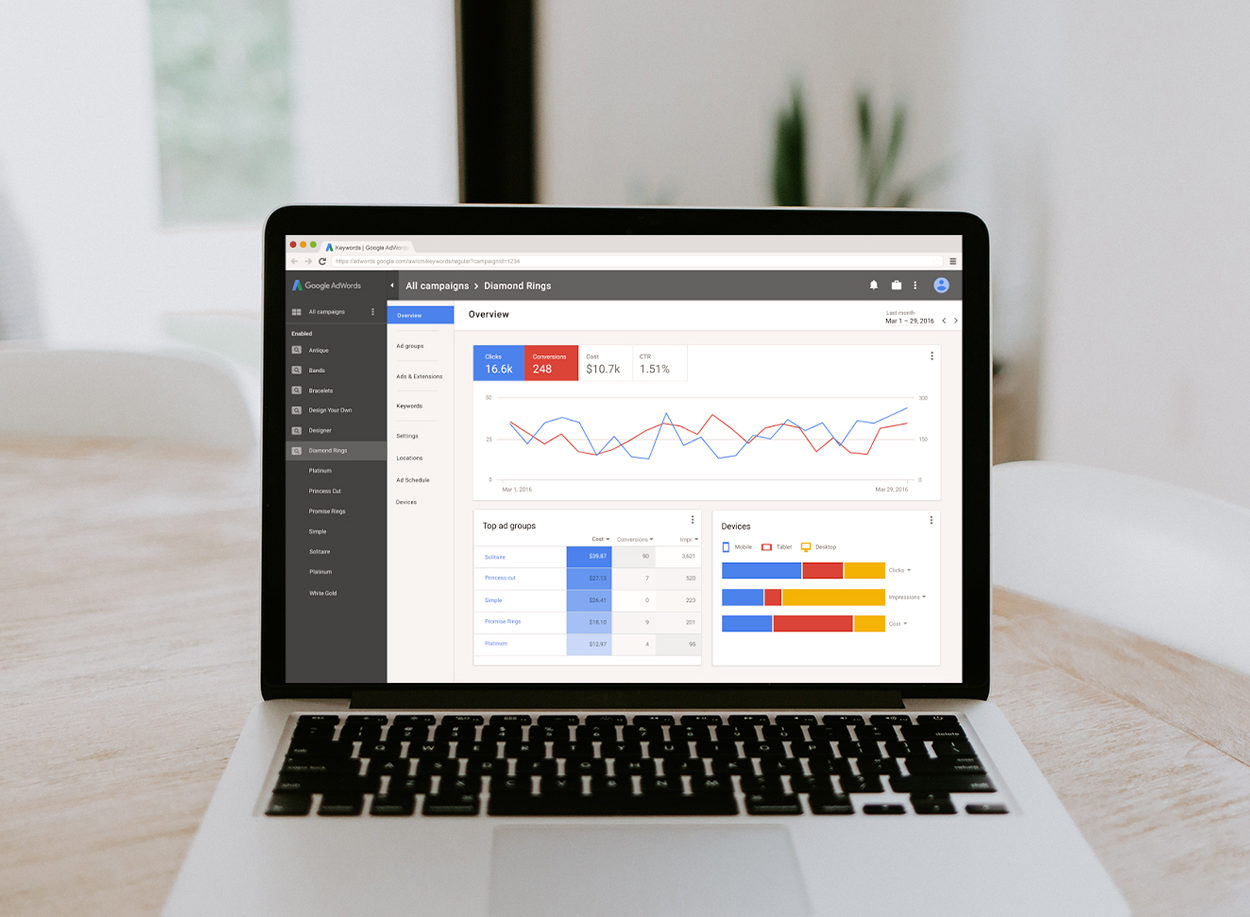 AdWords turned 15 last October, and it feels like the system is starting to show its age. Large accounts can take an age to load, and certain information such as geographic location and device type can be frustratingly difficult to find. This may be soon to change though, as Google announced in March last year that the system would be receiving a complete redesign. Last month one of our accounts was given access to the new alpha build and we can now begin to uncover what the new system can do.

The first change is immediately obvious, as you are greeted when you enter an account by the new overview tab. This tab is available at account, campaign and ad group level, and provides top line information on the data that the section contains. This includes top performing campaigns, ad groups, keywords, and ads, along with data segments such as time, location, and device type.

Previously, beyond the home dashboard and report editor, the only data visualisation supplied in AdWords was line comparisons of two metrics. Not only has the new overview tab doubled the number of possible metrics in these graphs to four, but a host of new visualisations have been added such as maps, segmented bars, and heatmaps. The result is a large amount of clear information that is much harder to acquire in the current interface.

For example, in the heatmap below we can quickly see that the peak time for impressions is 6-7 am in the weekdays, but climbs to 11am-1pm at the weekend. People continue searching for the topic slightly later on Fridays than other weekdays, but still not as late as on Sundays. This kind of insight would have taken much longer in the current interface, and can have meaningful effects on your decisions, such as when deciding on your ad scheduling. This is a recurring theme of the revamp, the ease at which data in your accounts can be reviewed and visualised, has been improved greatly.

The navigation has also seen changes. Gone are the tabs along the top of the interface, replaced by a second vertical bar on the left which sits next to the old (and reasonably unchanged) bar we are used to. This contains much the same sections as before, such as keywords and ad groups, but with a few notable changes such as the grouping of ads and extensions into a single section, and the addition of change history.

The Dimensions tab, which up until now has felt like the resting place of reports that don’t fit anywhere else, has been removed completely. Whilst its reports are still available (as the new Predefined Reports section) you will likely find yourself visiting them much less, as its most popular features such as top movers and geographic location have been given visualisations of their own.

More importantly than what has changed, though, is what has stayed the same. Once you move past the flashy overview tab and enter into an old section such as keyword lists, you will recognise the page that appears.

Apart from some icon updates, and the bar containing options such as edit and label not appearing until an element has been selected, the interface and reporting remains true to the current interface. The experience has been improved technically, the load times are quicker and the entire account feels more responsive, but the functionality has not been changed.

I went in to this earliest build of the new AdWords expecting to find something entirely new, but what I instead found was comfortingly familiar. When you get past the visualisations on the overview tab and get familiar with the new navigation system, you realise that beneath the updated visuals lies the same basic set up that has been the backbone of AdWords for 15 years. This makes the entire experience feel improved, as opposed to reworked, and means that when the system is eventually fully released it will surprise many with how a few changes can lead to a greatly improved experience.