Initially, challengers had 3 months to swim the breadth of the English Channel, and our MD joined with only 1 month to go, making waves as he finished 3 days before the end! – though he then needed a couple of trips to the physio to put his back right again!

Doing it together made a huge difference and we all felt the unity that formed within our team. Charting our progress generated some healthy competition but also created a buzz which brought swimmers closer together, encouraging each other to get closer to the finish line. 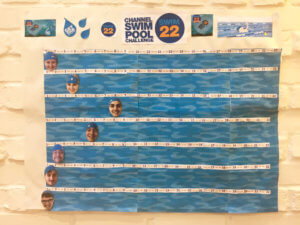 We are so proud of our upriseUP family, even the non-swimmers got involved by supporting and willing us to keep going with generous donations – everyone wanted to know our progress! There were times we thought we wouldn’t make it, but after a couple of months we all gained speed and propelled towards the end. It was great individually raising money whilst doing it and we are extremely happy with the results.

Whilst some decided 22 miles was more than enough, others, including myself, discovered the joys of swimming and decided to make it part of their regular fitness routine.

We work with a lot of charities promoting fundraising based campaigns and getting involved first hand in the events really helps us understand and connect with the fantastic causes that we work with. It was hard work, but being part of such a great cause was a huge motivation for reaching that finish line.

Diabetes UK is a very special and deserving charity; we are touched by the amount of support we received during and after the challenge and we want to thank everyone who sponsored us. We are proud to have contributed to their ongoing research and to help support those who have Diabetes.

Diabetes UK are still taking Swim22 donations, so if you too would like to be part of the upriseUP Swim22 fundraising team, get in touch with us at hello@upriseup.co.uk. Alternatively find out more about Diabetes UK and donate on their website here