October was a quiet month overall, with a few major changes across the main platforms as we approach the holiday season.

If you want to check out last month’s round-up you can view last month’s summary here. Here are our highlights from the past few weeks.

Google have rolled out an updated look for their native report editor.

This move brings it more in line with Google Data Studio, with the editing panel on the right hand side mirroring styling and icons from Data Studio.

It’s nice that this has been brought in line with Data Studio, as there was previously no real reason to use the editor within Google Ads. It’s still nowhere near as good overall as Data Studio, but for simple reports where you just want to review a single account it is now an easier option. 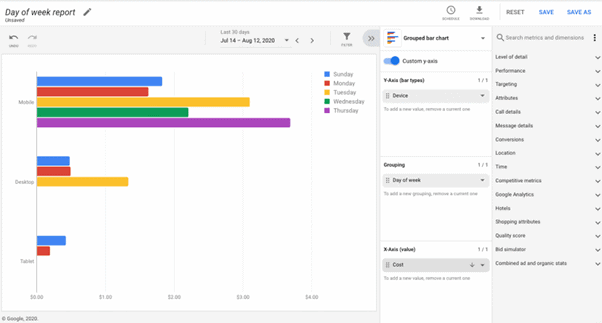 Google have introduced so-called “simplified” location reports over the last month. Previously, there was a User location report and a Geographic report. Now, there is one, which doesn’t quite emulate all the features.

Locations are now specified as a ‘target’ location or a ‘matched’ location, both of which are available in reports.

While on the surface some of this seems intuitive, the reports don’t seem to be as clear to us, and location data is simply harder to reach than it was before. Most advertisers won’t dig deeper into this, so are at risk of increasing the proportion of their budget wasted on inappropriate locations.

Data-driven attribution has become the most popular choice of the attribution models, but it had the downside of needing a relatively high number of conversions to function properly.

As the technology behind it improves, Google have lowered the threshold to use this model to 3,000 ad interactions and at least 300 conversions in the past 30 days. This was announced in a blog post along with other minor attribution news.

Lowering the barriers to use this will simply allow more advertisers to benefit from the learning, so can only be seen as positive!

If there was anything else that happened in the last few weeks that you found particularly enticing, feel free to tweet us @upriseUPSEM, email us at hello@upriseup.co.uk, or simply send us a message through our contact page.