What happened in SEO this month?

Is a question our team is asked at every monthly company meeting. Here are some of the announcements we found to be interesting in the SEO industry this month!

Lazyload to be HTML standard

Non-optimised images are one of the many banes of our SEO lives; getting the perfect blend of image quality and load time is vital to your images performing well in search; whether that be image search, image carousels. A step towards improving image load time is to implement lazyload.

Lazyload is a technique used to delay the loading of off-screen resources, such as images shown below the fold. This means devices will only load content as it appears on the screen, rather than wasting data and processing time trying to load the whole page at once. The aim is to improve the page load time and enable users to engage with the content quicker.

Currently Lazyload has to be manually implemented, which can be a difficult and time-consuming process. So time-consuming that is a task preferably avoided. However, Lazyload has been merged into HTML standard, meaning we’ll no longer have to worry about implementing it ourselves! This is a great step towards general improvements in page speed and we’re incredibly excited to see it go live! Safari has implemented it, which should mean we’ll find Lazyload automatically available across all browsers in the future.

This month was a busy month for the Search Console team, with more updates released on the tool.

A review snippet enhancement report has been released on Search Console. It went live at the start of the month and has already proven useful with identifying issues in our client’s Structured Data.

However, it does appear to cross-over with other markup, notably Recipe Schema. Specifically, aggregate rating; where this is being flagged as an issue on the Recipe report, it’s being flagged as a full-blown Error on the Review Snippet report. Very confusing and conflicting.

Recipe Schema shares properties with Review Snippet markup, so it’s worth checking any changes you make on the structured data testing tool before pushing them live. If it’s Recipe markup, ultimately is has to adhere to these guidelines.

We love data, if you didn’t know already. And Google have made exporting their Search Console data much easier. Previously you were restricted in what you could export to table views and you’d have to export from various tables and cross-reference to build out your data. Now it should export all in one go; much better.

Google have made little adjustments to their change of address tool. Announced via Twitter, you can now not only establish the new domain of your site, but set up redirect validation for your top 5 URLs. You can also get notifications confirming the changing domain. As this process can take a while to fully switch over in search results, this is a small change that we can see providing that re-assuring little boost in domain migrations.

Mobile-First Indexing to be fully rolled out

Mobile-First Indexing first began rolling out in 2018. This week, Google have sent out messages to websites with mobile-indexing issues, claiming all websites would have mobile-first indexing within 6-12 months.

What is Mobile-First Indexing?

Mobile-First Indexing is where Google crawls and indexes the mobile version of your website. Websites that don’t have Mobile-First indexing have the desktop version of their website crawled and indexed instead. This means your website will be ranked based on it’ performance on mobile. The change was brought in to reflect the constantly growing use of search on mobile devices; ensuring your mobile performs well on mobile is crucial to your digital strategy. Google have gradually been rolling out Mobile-First Indexing across the web, it now looks like they’ve set a deadline for this roll out.

If you weren’t considering mobile before, you are now. If you’ve received a message from Google regarding mobile indexing issues, see what those issues are and look to resolve them. Mobile SEO is looking to be more important than ever in 2020; it’s a key area of SEO, and one we’re happy to help you with too!

Google have a new mark-up in Beta! It’s always fun to find out when new mark-up is becoming available, and this one looks like it could be doing content creators some serious favours. Google have teamed up with ICP and created a new meta framework that can be added to your images through Structured Data. The aim? To provide users with licensing information for images on their website.

This Schema isn’t live yet, but early implementation is being encouraged so sites are ready for when the mark-up is pushed to be live. Google have also announced they’ll be trialling the way this is presented in image search, first with a badge showing on images with licensing information available. Secondly, links will be presented taking users to the information. 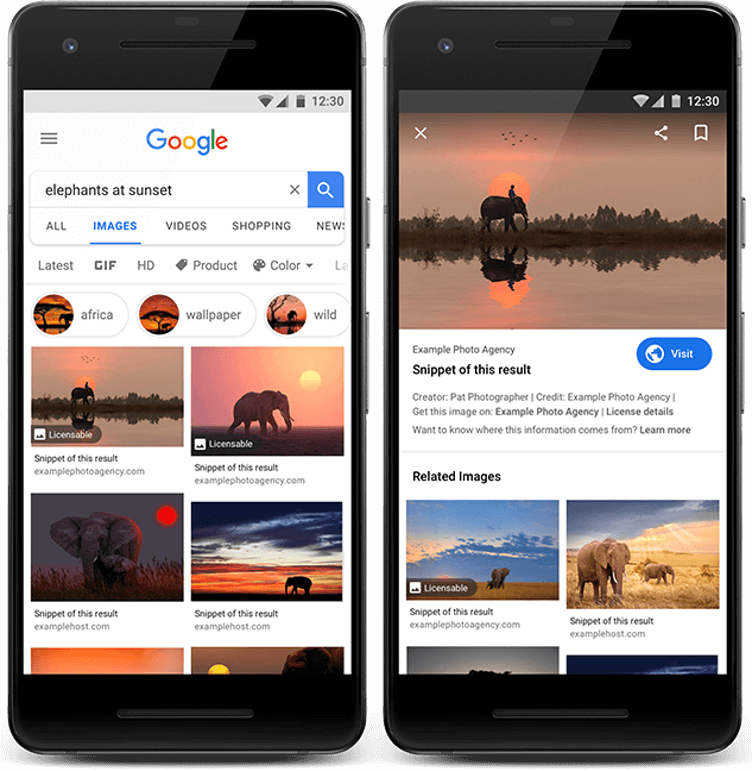 Google have announced this is purely to help content creators, though there are some that speculate this could be linked to recent revelations that websites are stealing images and claiming them as their own; all with the intention to get backlinks. The implementation of this framework would certainly help protect ownership of this content. The full SEO benefits? Well that information is currently pending.

There was an unconfirmed Google update at the start of the month. Barry Schwartz was on the case, but Google gave nothing away with Danny Sullivan claiming Google release updates everyday (he’s not wrong). However this update, though unconfirmed, did cause a bit of volatility in rankings from 7th-12th February.

Google confirmed there was nothing to be actioned from this update, which is standard protocol following an update. It also looked like some updates were reversed, so nothing to be too fearful of.

These were just some of the SEO tidbits that grabbed our attention, but we’d love to know if there was anything else that happened in February you found particularly enticing. Feel free to tweet us at @upriseUPSEM, email us as hello@upriseup.co.uk, or simply send us a message through our contact page.