What is Google Data Studio?

Google Data Studio is a fantastic report creating tool that allows data to be obtained from a wide variety of sources, and presented in a visually thrilling way. Originally available as part of the Google Analytics 360 Suite, it has now been rolled out across the world (except for ten countries – but more on that later). While officially it is still in Beta, it is capable of producing professional looking reports.

So why is Google Data Studio so exiting? Google have the quote by Joao Correia, (the Director of Data Insights at Blast Analytics & Marketing) prominently positioned on the Data Studio site which sums it up nicely.

“Google Data Studio marks the birth of a new era of how organisations consume, share, and use analytics data to drive insights and create even greater business value.”

This quote may be a load of waffle, but I completely agree with it. It has transformed the way we now produce reports, (both monthly and ad-hoc) and there have already been many situations I’ve come across where a Data Studio report has provided a perfect way to present data.

Data Studio works by connecting a data source (e.g. Google Analytics, Google AdWords, Google Search Console) and its associated metrics and dimensions. You can also upload any data to a Google Sheet and import it into Data Studio. This requires slightly more work than using a native Google product, but is still relatively painless.

These metrics and dimensions can then be used in a number of charts and graphs, and can be set to update automatically. While the number of options may appear quite daunting at first, it is in fact relatively straight forward to present your data once you learn how.

Ben is my account manager at upriseUP. He is extremely knowledgeable about all the services we provide and sees the potential of Data Studio to present data professionally, but he sometimes finds himself lost in the myriad of options provided. In this blog I hope to highlight some of the lesser known tools and abilities of Data Studio so that Ben, and you, can use them to make report creation easier.

One thing to note about Data Studio, is that while it is missing a number of desirable features that you would expect to be available, they are making regular updates which make report creating much less painful than just a few months ago. These changes don’t seem to get much publicity, but there is a helpful list of new features which is useful to check frequently.

Perhaps the most crucial missing feature currently in Data Studio is the inability to export reports. While you can share the direct link to other people, these people need to have a Google account to view the report. This means it’s not practical for sharing with large groups of people and it’s not possible to print a physical copy of the report.

The only solution that we have come up with, and the method suggested by users on the official Data Studio Forum, is to individually ‘print’ each page and save as a PDF. However, each of these pages then needs to be combined into a single file. Considering we have reports that can be as long as 50 pages, this process becomes tedious extremely quickly.

Fortunately, there has recently been a Google Chrome extension released called ‘Google Data Studio PDF Export’ which performs this process automatically. This saves considerable amounts of time and will reduce the pain of report creating until a proper export feature is implemented (Google employees have mentioned this feature on the Data Studio Forum).

One of the main strengths of Data Studio is its ability to update data in tables based on changing date ranges. A number of pre-set date ranges are available which can be applied to individual graphs and tables, but you can also create a custom date range which can be linked to all aspects of your report. Not only does this allow you to examine your data in any time frame, but also allows you to make changes on many tables and graphs with a single click.

Up until recently, only one of these custom date ranges could be present in a report. However, they have now expanded this to a two level system. A report level date range spans the entire file, but can be overridden by a page level one. This allows each page of your report to have a different custom date range, which can save you a lot of time you would otherwise spend updating the date ranges of specific tables. Date ranges are now page level by default, but you can right click and select the “Make report-level” option to promote it.

It is extremely useful to rename imported metrics and dimensions. These default names are automatically pulled through from the data set, and may not be the most relevant.

For example, in AdWords, the conversions column can be renamed to a more specific version of what the conversion is. For Shopping ads, we might use ‘Transactions’, or for a charity client we could use ‘Donations’.

Another example is to rename metrics that aren’t familiar to clients. For instance, there is an attribute named Conv. value/cost in AdWords, and is calculated by dividing the revenue generated by the cost of the ads. We usually refer to it as ROAS (Return on Ad Spend) when communicating with clients, and it makes sense to change it in Data Studio too..

To rename a metric or dimensions, simply go to Resource > Manage added data sources, and then edit the desired source. You can then change the name of any field you desire.

There are also a couple of handy keyboard shortcuts that I’ve found that don’t seem to be documented anywhere. When an object is selected, you can move it around using the arrow keys, not just the mouse (but don’t worry, that’s not the exciting bit).

When moving objects, you’ll find that they snap to a grid system. If you hold down shift (either left or right shift – it doesn’t matter) and move an object then the object does not snap to the grid and can be moved with much more precision. This can be a real help when making sure that objects and tables are lined up correctly in reports.

Another tip is to hold ctrl and use the up and down arrows when an object is selected to adjust the order of objects (this work with both ctrls and alt gr). Without this the order must be adjusted by right clicking on the object which is much more time consuming.

So, back to those ten countries where Data Studio is not available. I thought presenting this data to you would be an excellent way to show the flexibility of Data Studio, and what better way to present geographic data than an automatically generated map? 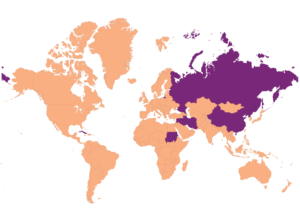 To do this, I created a simple spreadsheet in Google Sheets, then added the file as a new data source within Data Studio. The spreadsheet only contains two columns, country and a simple Yes/No column. Clearly this example is a very simple use of the Google Sheets integration, but hopefully it shows that almost every data set can be imported and visualised usefully in Data Studio.

For example in Bing Ads, you can download a csv report and then upload to a Google Sheet. Data Studio will then automatically determine the metrics using the column headers. This data can then be used in a similar way to AdWords data. Note some metrics like Avg. CPC cannot be directly imported but have to be defined within Data Studio, since weighted averages are not yet supported.